Review of my short story, “Doorbells and December”

This year’s Dancing With Bear Publishing’s Christmas anthology, titled Gingersnaps and Candy Canes, is available as a print book for $8.99 through Create Space at: https://www.createspace.com/4543075#!  The anthology consists of 12 stories by ­­­­9 authors, of which I am one. 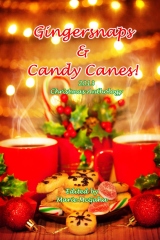 My story, “Doorbells and December,” was written in two parts. Part 1 was published in last year’s Christmas anthology. I purposely ended the story abruptly and left the ending to the reader’s imagination. I continued the story for this year’s anthology.  Parts 1 and 2 are published in the 2013 anthology. (Don’t forget to check the Dancing With Bear website in December 2014. Perhaps there will be another installment of this story.)

Excerpt from my  story, DOORBELLS AND DECEMBER:

Corinne knew her daughter wasn’t coming home—ever. The police had said the first seventy-two hours were the most crucial and without those vital leads at the start, there wasn’t much hope. They said she had likely run off to one of the bigger cities where she made her home on the streets, got high on drugs, and delved into prostitution.

“There’s a slim chance she might be alive,” they told her after numerous weeks of investigation. “If she hasn’t overdosed or been killed.”

Corinne listened to the words they didn’t say. She knew in her heart her daughter wouldn’t be coming home, as hard as it was to admit it.

The knock grew louder. Then the doorbell blasted its soulful tune.

Corinne jumped at the sound of the doorbell. She hated that sound. The doorbell had brought the news of her husband’s death. December had brought her daughter’s disappearance. Doorbells and December—two hated words in her vocabulary. If it weren’t for Kevin, she wouldn’t even celebrate Christmas.

The insistent doorbell blared again. She glanced at her grandson. Kevin, her one constant, her main purpose for living, stood in front of her. Henry was gone from her life—dead and buried. Her only daughter, dead or alive, was missing, and only God knew the whereabouts. She didn’t have anything to lose by answering the door, but she did have everything to gain. She opened the door.

Review of my story by Melissa Snark:

This review is written specifically for Catherine A. MacKenzie’s short story, DOORBELLS AND DECEMBER, which is a contemporary suspense thriller set during the Christmas holiday season. The writing is smooth and practiced, editing is solid, and characterization is good, but there were sections where the pacing felt a bit rough. This was certainly not my usual Christmas reading fare. I tend to prefer stories with gooey centers that give warm fuzzies. The subject material of this tale disturbed me, as it was meant to, so the author is successful in accomplishing her goal.

Corinne is grandmother to six-year-old Kevin. She has experienced loss and sorrow in December. First when her husband was killed in an auto accident, and later when her daughter, Miranda, disappeared under mysterious circumstances immediately following Kevin’s birth. Corinne and Kevin are left wondering about Miranda’s fate. Unknown to either, Miranda was kidnapped by a man and held hostage for those absent years. The story picks up with Miranda’s suspenseful escape, which is where the pacing of the plot really picks up.

So far as short stories go, DOORBELLS AND DECEMBER delivers a tale of uncertainty and fear that will involve the reader in the fates of these three characters. It left me unsettled. I liked the story and found the writing to be seamless, but I really wanted more than the ending delivered in terms of a joyous reunion between this distressed little family. However, the potential for a HEA-ending is there.

The stories and authors:

Did You Hear That? – Bobbie Shafer

Doorbells and December – Catherine A. MacKenzie

Adventures in the Aisles – Debbie Roppolo